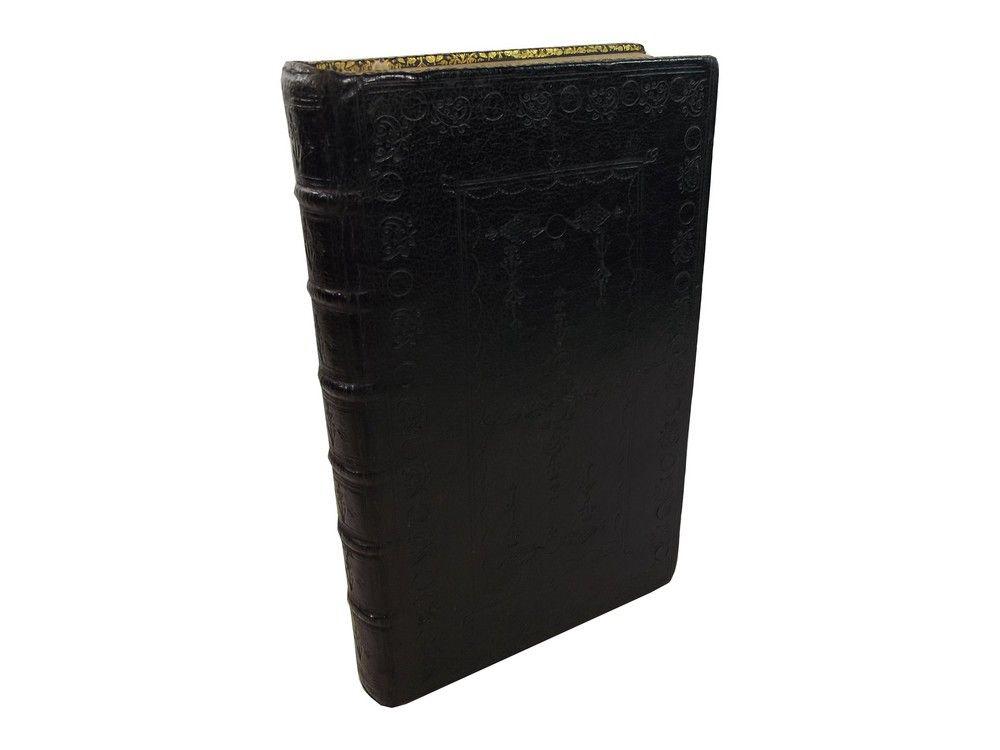 John Sturt with the Permission of John Baskett

xxii, 166pp. Contemporary semi-sombre binding, raised bands, spine in seven panels, each panel with central floral spray in blind, covers with panel design, double fillet bordering a volute and roundel roll, inner panel of double fillet with simple flower head tool to corners and halfway between, inner scalloped frame surrounding seed heads, volutes and roundels all in blind. Gilt roll to edges and inner edges, a.e.g., comb and curl marbled endpapers. Slightly rubbed to extremities, with light abrasions to lower cover. Lightly browned throughout, paper repair to head of pp 53/4, but generally clean, lacking the advertisement leaf to rear. Engraved throughout, red-ruled throughout, with the volvelle on page v. Sturt was apprenticed to White, himself a pupil of Loggan's, and was well known for his miniature work, "it was said that he could engrave the creed on a silver penny, a claim amply reinforced by his best-known works: engraved versions of the Book of Common Prayer and of Laurence Howell's The Orthodox Communicant, published respectively by subscription in 1717 and 1721. The first of these books, executed on 188 silver plates adorned with borders and vignettes, had a frontispiece portrait of King George I, the lines for which were composed of the creed, the Lord's prayer, the ten commandments, a prayer for the royal family, and Psalm 21, all inscribed in minute characters" (ODNB). Griffiths 1717:2 (page v with cherub heads only halfway between each corner, and is numbered vii), ESTC T141242 (ten locations worldwide)

A Letter to the Right Rev. Henry Bathurst, D.D. Lord Bishop of Norwich: Of the Tendency of Some of His Public Opinions and the Benefits Likely to Accrue to the Establishment in Church and State By the Repeal of All the Disabling Statutes Etc.

The Holy Bible; Bound with Cartons of Raphael D'Urbin