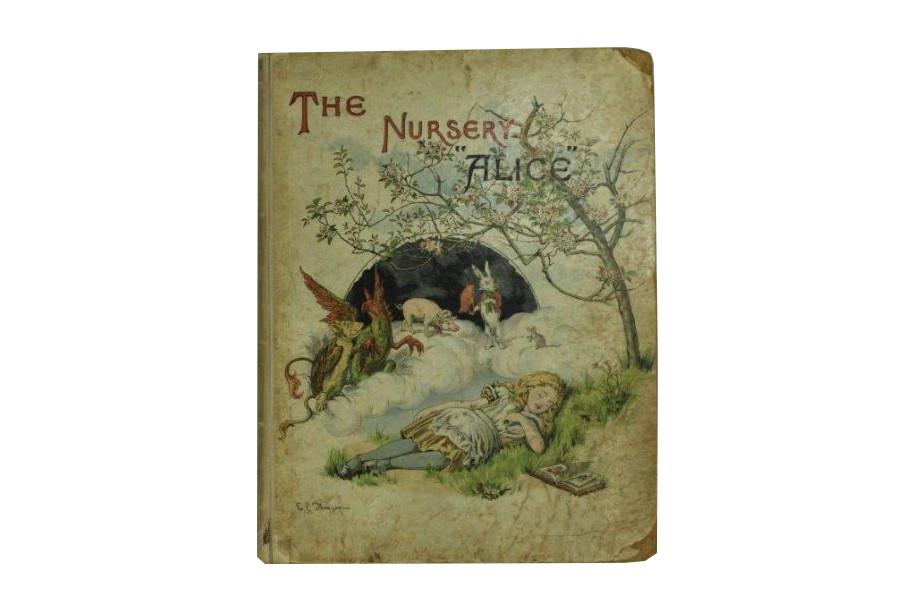 [12], 56pp, [8], original quarter cloth and decorated boards, the upper cover with a pictorial design in colour of Alice asleep and dreaming beneath a tree, signed 'E.G. Thomson', the lower cover with a picture of the March Hare in the centre, and the initials 'E.G.T.'

Now housed in a full morocco drop back box, with a hand painted copy on vellum, of an illustration from the book by Martin Frost to upper panel, raised bands, spine in six panels with vellum title label to second panel and vellum author label to fourth

Inscribed by Carroll, in his usual purple ink to half title, being one of one hundred presentation copies (see Williams, Madan, Green and Crutch, page 162), 'Marie van der Gucht with the author's love. Mar. 25, 1890'.

Marie van der Gucht is the dedicatee in the book, with the second letters of each line of the dedicatory verses 'A Nursery Darling', spelling out her name. This "second (first published) edition appears to differ from the first only in the date 1890, in the substitution of 'Price Four Shillings' above the imprint, and in the Advertisements at the end. Copies also have an inserted printed slip advertising Sylvie and Bruno [not found in this copy]. The impression consisted of 10,000 copies on white, rather than 'toned' paper, with greatly improved colour reproduction" (Williams, Madan, Green and Crutch, page 162), after Dodgson had rejected the first ten thousand sets of sheets printed by Edmund Evans, because the pictures were too bright and gaudy, so he instructed that they be reprinted.

Carroll's exercise book detailing who he had sent copies of 'The Nursery Alice' to, notes that Van Der Gucht's copy was entry number 83, with that first edition sold at Sotheby's in 2012

Presentation Copy from the Author to the Dedicatee

Shadows in Arcady - The Angelus, The Brass Plate, An Alley in Languedoc, The Devil at La Charite

The Pied Piper of Hamelin

Shakespeare's Poem WITH Crow's Song About Prospero and Sycorax Manuscript

Shakespeare's Comedy of The Tempest