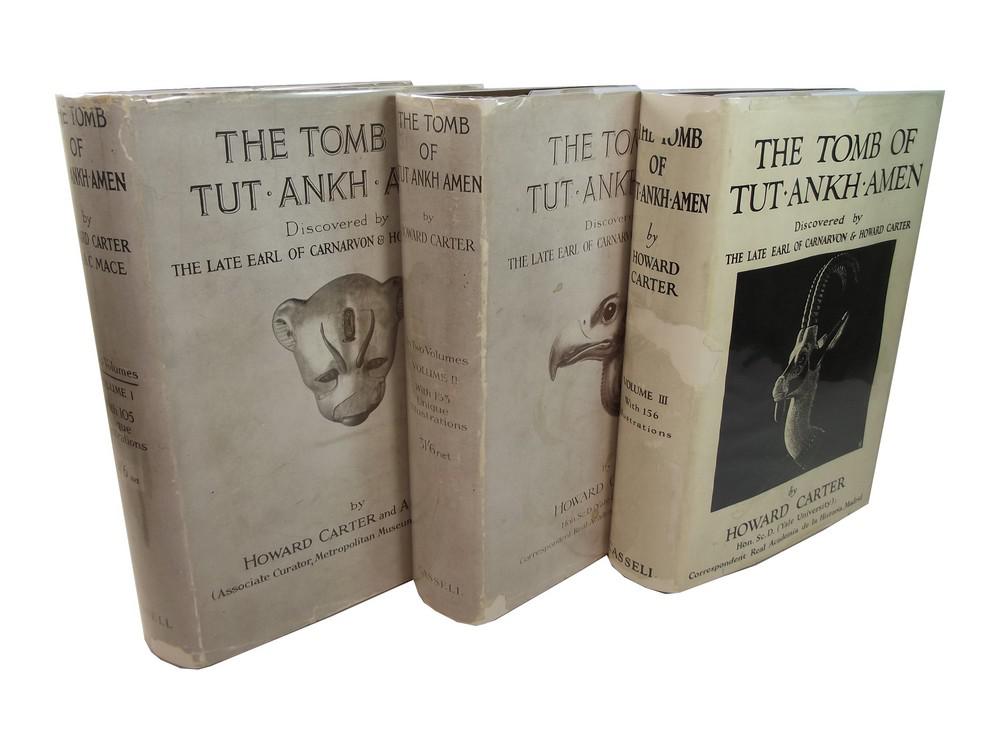 Three volumes complete, 1930-1933 - Volume One (fourth impression, 1930), xxiii, [1], 231pp, [1]; Volume Two - xxxiv, 277pp, [1] and Volume Three - xvi, 247pp, [1]. Original decorative cloth in DJ's, decorative endpapers. Gilt title, author, volume and publisher to spine, with title and author and central gilt scarab to upper cover. DJ's worn, chipped to edges with some loss, especially to volume three, but generally complete. Internally a previous owner's name to half-titles, some very minor browning, otherwise bright and clean. Volume one with seventy-nine photographic plates and one plan, volume two with eighty-eight photographic plates and volume three with eighty photographic plates. Volume one is a later reprint, volumes two and three are first editions, an attractive set, uncommon in DJ's. "Carter, Howard (1874-1939), artist and archaeologist ... In the summer of 1922 Carter persuaded Carnarvon to allow him to conduct one more campaign in the valley. Starting work earlier than usual Howard Carter opened up the stairway to the tomb of Tutankhamun on 4 November 1922. Carnarvon hurried to Luxor and the tomb was entered on 26 November. The discovery astounded the world: a royal tomb, mostly undisturbed, full of spectacular objects. Carter recruited a team of expert assistants to help him in the clearance of the tomb, and the conservation and recording of its remarkable contents. On 16 February 1923 the blocking to the burial chamber was removed, to reveal the unplundered body and funerary equipment of the dead king. Unhappily, the death of Lord Carnarvon on 5 April seriously affected the subsequent progress of Carter's work. In spite of considerable and repeated bureaucratic interference, not easily managed by the short-tempered excavator, work on the clearance of the tomb proceeded slowly, but was not completed until 1932. Carter handled the technical processes of clearance, conservation, and recording with exemplary skill and care. A popular account of the work was published in three volumes, The Tomb of Tut.ankh.Amen (1923-33), the first of which was substantially written by his principal assistant, Arthur C. Mace" (ODNB)