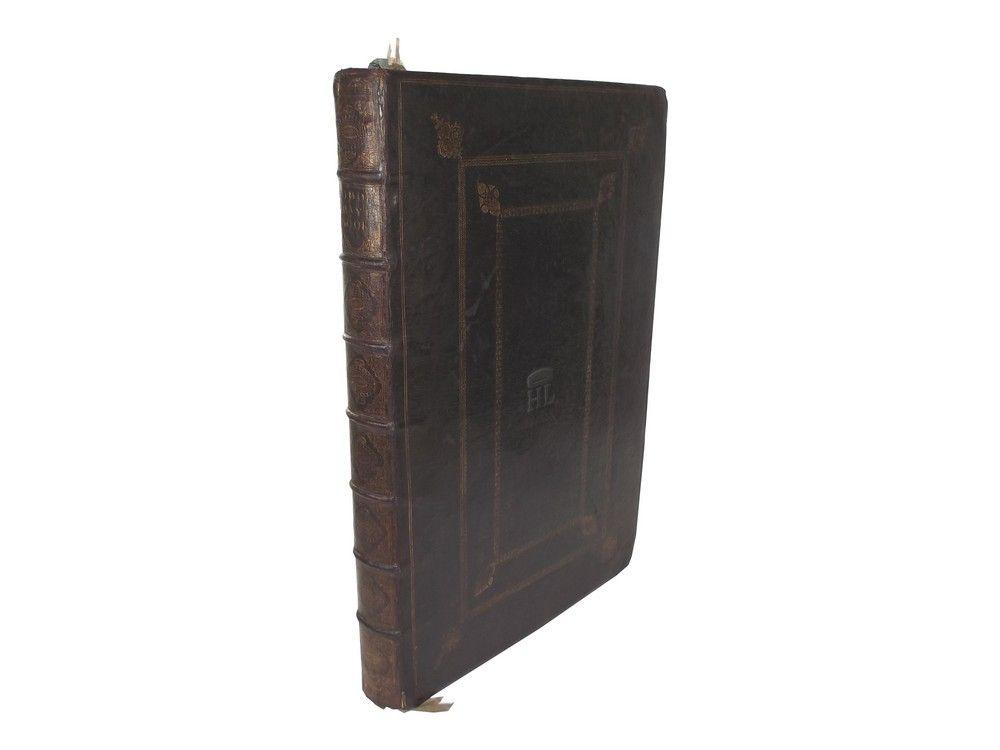 Unpaginated, collates A2, *a2-*d2, A4-Aaa4, Bbb2-Ccc2. Contemporary full morocco, raised bands, spine in eight panels, title in gilt to second panel, remaining panels with a triple fillet framing central repeated ovals made up of small tools with a drawer handle tool above and below with volute corner pieces, covers with double fillet bordering a double panel design, both with floral spray corner pieces, with the blind stamp H.L. beneath a viscount's coronet to the centre, gilt roll to edges and inner edges, comb and curl marbled endpapers, several old silk place marks. Rubbed and bumped to extremities, small splits to head and foot of outer joints, small amount of loss to leather at spine ends. Internally occasional light foxing and browning, but generally fairly clean, small amount of loss to corner of T1, old repair to reverse of rear marbled endpaper. Red ruled throughout. The H.L. blind stamp is that of Henry Yelverton, 1st Viscount Longueville, with the name in ink of his ?wife Barbara Yelverton to the ffep. There are other examples of Yelverton's stamp in the B.L. Database of Bookbindings (c67g12 and c21a51 for example) and the British Armorial Bookbindings database at the University of Toronto Libraries website. Above the contents page is an old ink inscription, 'The legacy of the Rt. Reverend Father in God, John Lord Bp. of Oxford' which probably relates to John Fell. Griffith notes that is has the prayers for Kings Day (the accession of James II) replacing the Fire of London prayer, but this is not the case here, as the Fire of London prayer remains, see Griffith 1681:6. The ESTC notes only four copies worldwide, though apparently the Bodleian also has one. An attractive folio common prayer with excellent provenance

Select Sermons; to Which are Added Two Charges to the Clergy of the Diocese

The Holy Bible; Bound with Cartons of Raphael D'Urbin

A Short Commentary with Strictures, on Certain Parts of the Moral Writings of Dr. Paley and Mr. Gisbourne - To Which are Added as a Supplement, Observations on the Duties of Trustees and Conductors of Grammar Schools Etc...

A Connected and Chronological View of the Prophecies Relating to The Christian Church; In Twelve Sermons