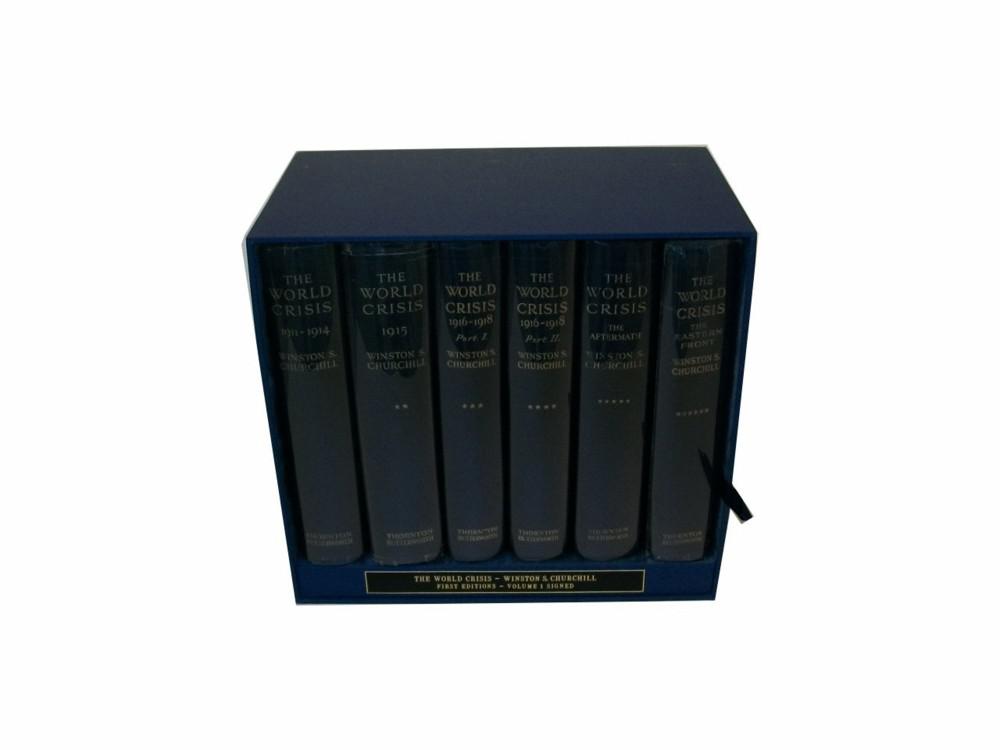 Five volumes in six, complete - Volume One, '1911-1914' - [6], 536pp; Volume Two, '1915' - 558pp; Volume Three, '1916-1918 Part I', 292pp; Volume Four, '1916-1918 Part II', ix, [1], 293-590pp; Volume Five, 'The Aftermath', 474pp and Volume Six, 'The Eastern Front', 368pp. Original cloth, title, author and volume stars in gilt to spines, with title blindstamped to upper cover. Slightly rubbed to extremities, a couple of minor nicks and bumps to spine ends, the upper cover of volume one has two round white marks towards the foot and the upper cover of volume six has a small round white mark to the centre, with a larger one towards the foot. Internally lightly browned, especially to endpapers, but clean. The foot of the last page of volume six has been repaired, and the map re-glued. With a total of thirty-five folding maps and plans, and all errata slips called for. Signed by Churchill to ffep of volume one, 'Inscribed by Winston S. Churchill 1948'. Now housed in a blue cloth velvet-lined slipcase with a titled plinth, custom-made by Temple Bookbinders. Published between 1923 and 1931, this is Churchill's overview of the First World War, and was a financial success, Woods noting that, "'The World Crisis' bought Chartwell for him" (Woods, Page 46). Woods A31(a)