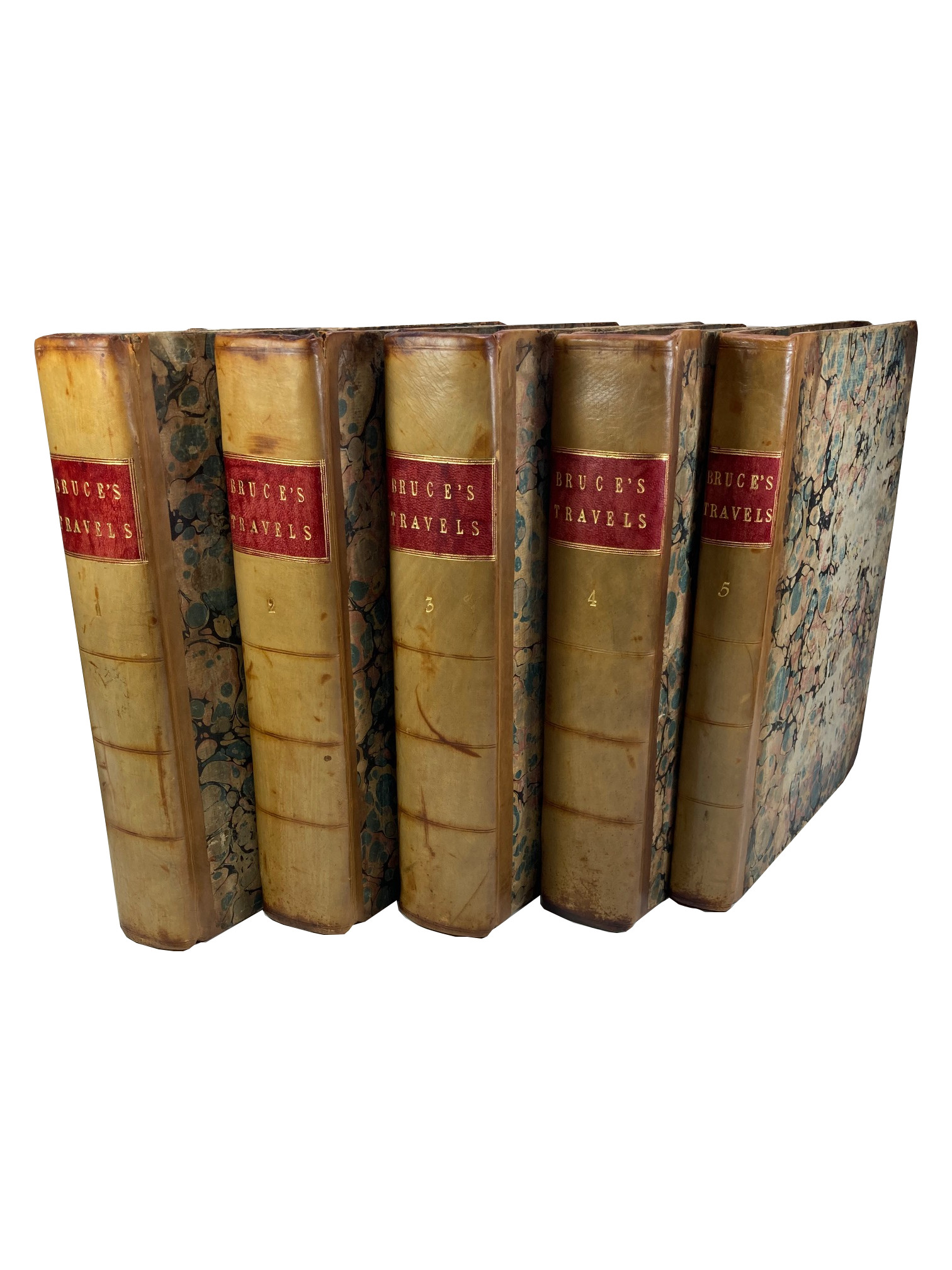 Five volumes complete - Volume One - [16], [i]-lxxxiii, [1], [1]-535pp, [1], eight plates and a folding map; Volume Two - [4], [i]-viii, [1]-718pp; Volume Three - [4], [i]-viii, [1]-759pp, [1], two folding maps and four plates; Volume Four - [4], [i]-viii, [1]-695pp, [1], three plates and three explanatory leaves and Volume Five - [4], [i]-vi, ix-xiv, [1]-230pp, [10], forty-three plates. Original marbled paper over boards, later rebacked in half calf, smooth back with spines in six panels, title label to second panel, volume number in gilt to third. Spines slightly rubbed and faded, paper covering boards rubbed and chipped with some loss, corners bumped and worn. Volume one with a small hole to A4 catching a couple of letters but with no loss of sense, plate of 'Arab Shekh' lacks top right hand corner, but outside of plate mark and not affecting image; volume two with some light foxing, a small piece is missing from the top margin of Aa1, bottom corner of 4A4 missing not affecting text, a small tear to 4H3 and a piece missing from the bottom margin of 4Q2; volume four has small tears to bottom margin of 4O2-4P3 and in volume five U1and FF2 both lack bottom corner though not affecting text. Inner joints strengthened with Japanese tissue paper. Volume five also lacks the list of plates to rear (as often). Armorial bookplate of W. Scafe to front pastedowns. With all maps and plans called for (two of the folding maps reattached), a total of fifty-eight plates and three folding maps. Bound at the start of the first volume is the rare separately published 'Ode to James Bruce Esq. by an Unknown Hand' and a small portrait of Bruce on a separate leaf. The 'Ode' is believed to be by Fanny Burney (see Rothschild 553 - smaller than the one mentioned, so presumably this one cropped to fit in the binding). James Bruce (1730-1794), African traveller, the DNB notes that these volumes are "most fascinating ... [including] a full narrative of his travels from the beginning; a valuable history of Abyssinia ... and disquisitions on the history and religion of Egypt, Indian trade, the invention of the alphabet, and other subjects, evincing that the great traveller was not a great scholar or a judicious critic ... [however] few books of equal compass are equally entertaining; and few such monuments exist of the energy and enterprise of a single traveller ... he will always remain the poet, and his work the epic, of African travel" (DNB) Much of Bruce's book was thought to be fanciful, he was satirised by Peter Pindar in the 'Complimentary Epistle to James Bruce Esq.', with Pindar noting similarities between Bruce and Boswell. Despite this, the publication of Mansfield Parkyns's 'Life in Abyssinia' in 1853 was "more sensationally, a vindication of the observations of James Bruce's travels in the region, the Scot having earlier been defamed for what were thought to be fantastical claims about the people and their culture" (Keighren, Withers and Bell, 'Travels Into Print - Exploration, Writing, and Publishing with John Murray, 1773-1859', page 153. The 'Ode to James Bruce' is found at only Trinity Cambridge in JISC. Cox I:388-389 and Ibrahim-Hilmy I:91

Shipping P.O.A. Subject to quotation and will be charged separately.
Year

Damascus and Palmyra: A Journey to the East. With a Sketch of the State and Prospects of Syria, Under Ibrahim Pasha

Narrative of the Operations and Recent Discoveries Within the Pyramids, Temples, Tombs, and Excavations in Egypt and Nubia WITH Plates Illustrative of the Researches

Russia on the Black Sea and Sea of Azof: Being a Narrative of Travels in the Crimea and Bordering Provinces; with Notices of the Naval, Military and Commercial Resources of Those Countries

A Voyage to the South Sea, Undertaken By Command of His Majesty, for the Purpose of Conveying the Bread-Fruit Tree to the West Indies, in His Majesty's Ship the Bounty, Commanded By Lieutenant William Bligh