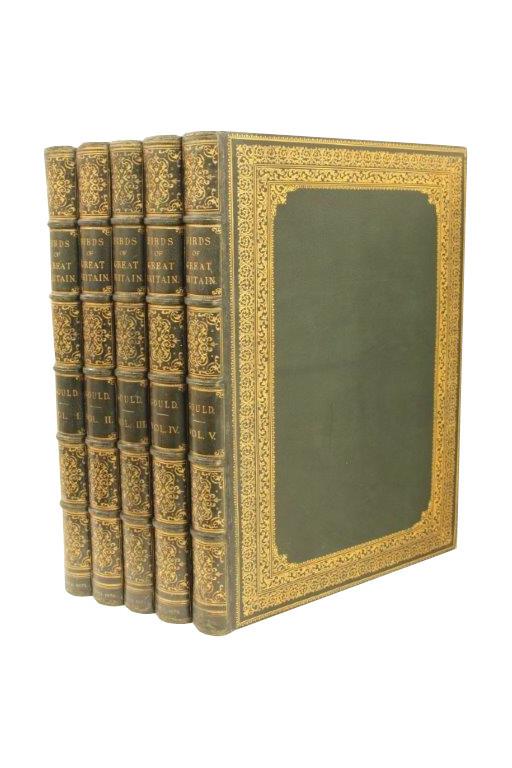 Slightly rubbed to extremities, especially foot of spines. Internally some occasional light soiling, two plates with splash of foxing to head (Calamoherpe Palustris and Luscinia Philomola), but otherwise generally quite bright and clean

With three hundred and sixty-seven fine, hand coloured lithograph plates by Richter and Hart after Gould and Wolf, heightened with gum-arabic

Gould's most popular work, "the most sumptuous and costly of the British Bird books", (Mullens and Swann, Bibliography of British Ornithology, page 240), with four hundred and sixty-eight subscribers listed in 'An Introduction to the Birds of Great Britain', it was originally issued in twenty-five half-yearly parts, priced at three guineas each according to the prospectus, commencing in October 1862 and concluding in December 1873. Sauer presumes fifteen plates to each part, with fourteen in part nineteen and eight in the final part, though he does note that "other mathematical combinations are possible" (Sauer, John Gould The Bird Man, page 77). John Gould (1804-1881), "will always be remembered by the magnificent series of folio works bearing his name ... which are excelled in extent and beauty by the work of no one other ornithologist, past or present" (Mullens and Swann,, page 240)

The Poetical Works of Thomas Campbell